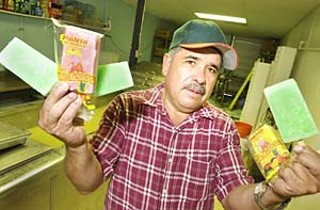 Adolfo Alvarado, like many other Mexican immigrants, came to this country seeking a more promising future for himself and his family. Leaving his native San Luis de la Paz, in the Central Mexican state of Guanajuato, he moved his family to Gilroy, Calif., in search of a better future. Years later, now in Austin, he oversees a small but growing emporium of frozen treats, built 100% from scratch.

Gilroy is a city of about 40,000 people in Santa Clara County, an agricultural region near the Bay Area, where nearly 50% of the population is Hispanic. There, Mr. Alvarado found employment at Delicias de Michoacán, a Mexican-style paletería. There, and later at Paletería la Guadalupana, he learned and mastered the art of making paletas. Having acquired the necessary knowledge and savings, he decided it was time to go out on his own, and with his family he opened La Super Michoacana.

In 1996, he moved his family to Austin, leaving his son in Gilroy to oversee operations at the original Super Michoacana. In Austin, his business has grown to employ his wife and daughters, as well as a few other employees, to make 16 all-natural flavors of paletas during the warm-weather season. Part of the allure of paletas over regular American Popsicles is the fresh-fruit flavors. Most of the clientele are Mexican nationals or their American-born children, who enjoy tasting traditional flavors that remind them of home. “The most popular flavor by far is coconut,” says Alvarado. “We sell twice as many coconut paletas as any other flavor.”

There are other very interesting flavors available, however. My personal favorite is pepino con chile, a refreshing combination of fresh cucumber and watermelon, seasoned with a good dose of fresh lime juice and a bit of powdered chile piquín. The result is tangy, sweet, and a little savory, my favorite combination of flavors. If that sounds too exotic, try arroz. The best way to describe this is as frozen rice pudding on a stick, complete with cinnamon and raisins. Think of it as frozen horchata. And on a hot day, nothing beats the tropical flavor of tamarind, a tangy and thirst-quenching treat. There are also creamy paletas de leche, like guava, pecan, and piña colada, and light and refreshing paletas de agua, like mango, lime, and pineapple, among other unique flavors.

Paleta season for La Super Michoacana starts around March, as soon as the weather starts warming up, and runs through October. During this time, they sell about 400,000 paletas every three months. They have little freezers with paletas for sale at some convenience stores around town, and they often get orders for parties and special events, including the Cinco de Mayo and Diez y Seis de Septiembre celebrations. They even sell paletas to the city of Austin for special events.

But the bulk of the business is done in the streets. The little green pushcarts, conspicuous now in many areas of the city, are operated by independent contractors, who purchase the product directly from the impeccably clean factory at 2002 E. Fourth (481-1332) and sell the paletas to the public for $1 apiece. La Super Michoacana purchases American novelty Popsicles, and some of the contractors sell them, but the ones manufactured by La Super Michoacana outsell them 2-to-1. The majority of the vendors are Mexican, but Alvarado encourages everyone: “I sell products to anyone who wants to work. When people buy our products, they get to borrow the carts for free. All that’s required is that they return them clean.

“These vendors are people looking to supplement their income,” says Alvarado. “They have jobs in restaurants or in construction. But these days, with the economy the way it is, they need something else to make ends meet.” So much for those who claim Mexican immigrants come here to take away jobs. They create their own. When times are tough, they’re not on street corners begging for change; they go to work, walking all over the city under our brutal summer sun, selling frozen slices of tradition. Every paleta you buy is helping someone help himself and his family. And they are darned delicious, to boot.

During the winter months, Mr. Alvarado takes advantage of the downtime for upkeep at the factory, to service the little carts, and to order more labels from his source in Monterrey, Mexico. He is considering opening a retail outlet, where he would sell paletas and fresh-fruit aguas frescas, in the future. But for now, he is content with what he’s got. “I want to make sure everything is of the highest quality, so I don’t want to spread myself too thin,” he explains. “And getting the required Health Department permits takes time and effort.”

So for now, we’ll have to rely on those hard-working paleta men. Next time you hear the little bells ringing in your neighborhood, give them a try. You can’t go wrong for a buck. It’ll be a good opportunity to practice your Spanish, and to celebrate Mexican Independence Day in true Mexican style. °Que vivan las paletas!